AMP reached several significant hydro project milestones in 2013, and the finish line is coming into sight.

Two of the four – Cannelton and Meldahl, which began construction in 2009 and 2010, respectively – are in the starting stages of commissioning. Construction at Willow Island and Smithland also continues to progress well.

2013 construction expenditures for the four projects totaled slightly more than $301.2 million. “At the end of the year, contracts had been awarded for all remaining work, including transmission line work, and all projects were within budget and moving forward,” said Pete Crusse, vice president of hydroelectric construction.

AMP has been heavily focused on the commissioning efforts at Cannelton and Meldahl, because of the massive amount of vital work that is required to get the plants up and running.

“There are 39 hydro plant systems that must get started up in commissioning,” Meier said.

That extensive effort must be coordinated among AMP; the City of Hamilton (which retains the rights for a 51.4 percent share of Meldahl and is developing the hydro facility with AMP, who owns the project through a separate wholly owned limited liability company); future AMP hydro employees; the powerhouse contractors; the equipment vendor, Voith Hydro; and MWH, AMP’s project engineering consultant.

“We are taking a structured engineering approach to commissioning,” Perry said. That, he explained, involves extensive collaboration, monitoring, evaluation and testing as the project progresses through the following stages:

“We’re ahead of the game on commissioning,” Perry said. “Our team is performing well in preparing the facilities for operations.”

As January came to a close, AMP was completing its hiring of seven Cannelton operators.

The new staff will begin their operations training with three to six months at the OMEGA Joint Venture 5 Belleville Hydroelectric Facility.

They will follow that with three to six weeks of control switchboard training at Voith Hydro’s North American headquarters at York, Pa., before settling in at Cannelton for completion and startup.

The City of Hamilton is responsible for hiring and training Meldahl staff, which will consist of eight operators and a plant superintendent.

Here is a brief construction overview: 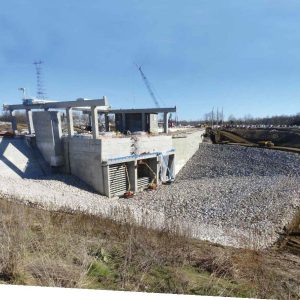 A layer of riprap surrounds the powerhouse at the Cannelton hydro project as work continues on erecting bulkhead gates.

The 84-MW Cannelton project is located on the Cannelton Locks and Dam near Hawesville, Kentucky.

As 2013 came to an end, all of the approximately 93,500 cubic yards (CY) of structural powerhouse concrete had been placed and the powerhouse was made watertight soon after in January.

Inside the powerhouse, installation progressed on the three 28-MW bulb-type turbine-generator units. In addition to that, contractor crews continued to work on electrical and mechanical systems, installing piping, conduits, cable trays and the plant control system.

Outside the powerhouse, contractors had laid a bed of riprap around the structure. The large, irregularly shaped rocks had been placed to prevent the river from scouring the approach and tailrace channels and other areas around the powerhouse.

That riprap will be under water by summer as Walsh Construction pumps in river water to equalize water pressure on both sides of the cofferdam in preparation for its removal. 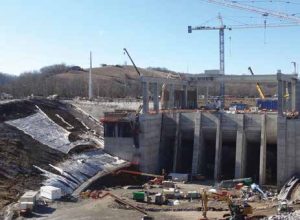 View from downstream of progress being made at the Meldahl hydro project.

Commissioning work on the 105-MW Meldahl hydro project, located on the Capt. Anthony Meldahl Locks and Dam near Maysville, Kentucky, was also moving along.

Near the end of January, despite some limitations created by the extremely cold weather, Alberici Baker had completed placing about 99 percent of the project’s 111,370 CY of structural concrete needed.

After having its work slowed from high river conditions in December and early January, Aquarius Marine resumed approach channel dredging and hauling operations in mid- January. Then it was again forced off the river due to high water. Aquarius also continued placing riprap on the downstream, landside cofferdam slope and downstream of the landside closure structure.

The project also required construction of a three-mile 138-kV transmission line to connect Mehldahl to the Duke Energy transmission system. That included joint construction with Duke of a 345-kV interconnection substation. After energizing the new substation yard in mid-December, contractor Sargent Electric was focusing its efforts on completing work inside the control building and on completing the tie-in between the powerhouse H-frame structure and the last structure of the transmission line.

Concrete placement for the Willow Island powerhouse is about 75 percent complete.

The 35-MW Willow Island project, the smallest of the four, is located on the Willow Island Locks and Dam near St. Marys, West Virginia.

By late January, Ruhlin Construction had placed 73 percent of approximately 75,204 CY of concrete required for the powerhouse. About 20 percent of the 60,000 CY of hardfill – a mixture of cement and soil aggregate – had been placed for the closure structure.

“Ruhlin had to cancel outside work for several days in January and the first part of February because of the extremely cold weather, which slowed both the concrete and hardfill placements,” Crusse said.

In addition, ICS, the Ruhlin subcontractor, continued pre-assembly of the bulb turbine shafts and bearings for both 17.5-MW units.

On the transmission side, Sargent Electric Co. began work in January on the construction of a 138-kV transmission line that will run about 1.6 miles from the H-frame structure on the Willow Island powerhouse to the existing 138-kV substation owned and operated by FirstEnergy. 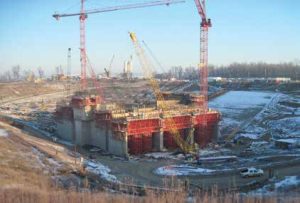 Powerhouse construction is progressing well at the Smithland hydro project.

At the 76-MW hydro project located on the Smithland Locks and Dam near Smithland, Kentucky, approximately 65 percent of the planned 75,201 CY of structural concrete had been placed by late January. Hardfill placement for the closure structures, which contractor CJ Mahan had just begun, stood at about 1 percent, or 1,600 CY.

On nearby Sand Island, hydraulic dredging continued for the excavation of approximately 1.2 million cubic yards to create the tailrace channel. Dry and underwater excavation work also got under way on the approach channel.

On the transmission side, Sargent Electric Co. and its subcontractors have begun right-of-way clearance and structure foundation work as part of its construction of a two-mile-long 161-kV transmission line to connect to the Big River transmission line in the MISO RTO.

To learn more about AMP’s hydro projects, visit the Hydroelectric Power page of the AMP website.