AMP Fremont Energy Center. Prairie State Energy Campus. The Cannelton, Meldahl, Smithland and Willow Island hydro projects. Power-purchase agreements in landfill gas and wind generation. Equity ownership in The Energy Authority, an expert in Regional Transmission Organization markets and energy/gas hedging strategies. With these and other major strategic steps it has taken in recent years, AMP has made smart investments and significantly expanded its generation asset base and other resources to help make sure its members are getting competitively priced, reliable power.

As substantial as AMP’s progress has been, however, the work must go on. AMP is still exploring other smart investment opportunities in cost-effective generation resources that best serve its members’ projected needs.

“AMP continues to work on a forward-looking strategy that lays out what generation assets we should build versus what capacity we should buy,” said Pam Sullivan, senior vice president of marketing and operations. “As we consider prospective generation resources, we perform a thorough, long-term analysis, looking for the right project offering both the projected lowest cost and the lowest risk over the long term.”

The ultimate goal of AMP, Sullivan said, is to maintain a diverse power-supply portfolio that reduces its members’ exposure in the energy markets, which have proven to be very volatile. Reflecting marked progress toward that goal, purchased power as part of the AMP member energy resource mix is projected to shrink from 62 percent in 2012 to 36 percent in 2015. That includes a significant amount of additional capacity in renewables that will total 21 percent of the mix.

With AMP having made significant strides within the last few years in constructing and acquiring a diversified mix of generation assets to meet its baseload and intermediate needs, there is more strategic focus now on building peaking generation. AMP’s 2014-2038 long-term power supply modeling shows a need for significant peaking generation.

“AMP members have a need for 1,500 megawatts (MW) of peaking capacity,” Sullivan said. “Our goal is to find the best way to meet that need.”

Contributing to that need is the number of peaking generation units in AMP’s fleet that are nearing retirement, explained Mike Perry, senior vice president of generation operations.

“Much of the natural gas and diesel generation we have is getting older,” he explained. “The technologies for these existing units are more difficult to maintain and provide replacement parts for. That generation has served its purpose, and we are now at the point that we need to plan for its retirement and replacement.”

AMP made a significant move to obtain peaking generation when it signed a non-binding memorandum of understanding in late 2012 with Akron, Ohio-based FirstEnergy Corp. to construct, own and operate a proposed natural gas generating facility. The 873-MW gas combustion turbine project was to be located on the premises of FE’s plant in the City of Eastlake, Ohio. FE was to construct, operate and maintain the facility on behalf of itself and AMP. Upon completion, AMP would own 75 percent of the generation output, with FE owning the remaining 25 percent.

Because of a number of factors, including uncertainty surrounding the future of tax-exempt and tax-advantaged financing, as well as continued regulatory uncertainty, AMP decided in spring 2013 not to move forward with that project.

With that cancellation, AMP continued to move forward with its due diligence that included technology reviews, siting evaluations and discussions with construction vendors in support of its members’ peaking needs. By the end of March 2014, AMP expects to announce recommendations on peaking technologies and overall strategy.

More solar to be deployed 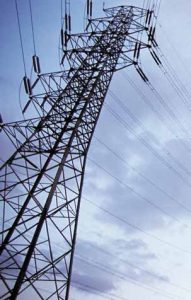 Installing behind-the-meter solar generation at member community sites is another smart investment option AMP is pursuing for peaking capacity. AMP didn’t deploy any solar in 2013, following its successful development of the Napoleon Solar Facility in 2012, but it has a goal this year of building a minimum of 25 MW of solar behind members’ meters. With siting studies completed and financing options being evaluated now, announcements on projects are expected sometime this spring.

“Behind-the-meter-peaking generation provides many benefits for our communities,” Perry said. “It reduces transmission costs, plus it serves as an energy backup during peak periods in both summer and winter.”

Beside the transmission benefits it would provide AMP members, building solar generation would avoid emissions risks, reduce construction risks and would allow participants to take advantage of tax-equity opportunities. It also would further diversify power supply portfolios with a renewable generation resource. A smart investment like that is particularly important to AMP member Delaware Municipal Electric Corp. (DEMEC), which is in the development stages of a solar project with AMP.

“DEMEC and AMP basically share the same goal: diversification in the power-supply portfolio,” said Patrick E. McCullar, AMP Board member and president and CEO of DEMEC, a joint action agency headquartered in Smyrna, Delaware, that serves nine municipalities. “We are not going to be overly dependent on one fuel source, and are expanding to include more renewables in our portfolio.”

Considered to be among the public power leaders in developing and supporting renewable energy, DEMEC receives 100 percent of the generation of Duke Energy Renewables’ 69-megawatt (MW) Laurel Hill Wind power Project in north-central Pennsylvania. It also has 23 MW of solar in its portfolio at two member locations – 10 MW in Dover and 13 MW in Milford – and is planning to add more.

“We continue to look for opportunities to build solar and are happy to be part of AMP’s solar initiative,” he said.

DEMEC is working with AMP in developing a 1-MW solar generation facility that will be located in Smyrna next to the Warren F. Beasley Power Station, DEMEC’s 100-MW (fired) natural gas peaking facility. The installation will be behind the meter, McCullar explained, because there are far more benefits – particularly in the form of transmission savings – to not having solar as a capacity resource with PJM.

“We successfully reduced peaks for Milford by about 9 MW with the 13-MW Milford Solar Farm behind the meter,” McCullar said. “That’s real money.”

The goal for DEMEC and for AMP and its other members, McCullar said, is to create an effective asset hedge from PJM-operated power markets that he describes as “dysfunctional.” Doing that through a strategy that includes developing the right mix and size of self-supply assets helps provide reliability, diversity and certainty in power cost. It was DEMEC’s pursuit of self-supply assets – in this case, taking the largest single share of AMP’s highly efficient 707-MW (fired) natural-gas combined cycle Fremont Energy Center – that led DEMEC to partner with AMP in 2011.

“Performing our due diligence and making the right kinds of power-supply investments is very critical, given today’s environment and the regulatory and energy market-challenges we see in the future,” McCullar said.