While the city of Paducah is home to 25,000 residents, this traditional river town is bigger than it seems.

Situated on the banks of the Tennessee and Ohio rivers, the city has grown into a central hub for healthcare, retail, financial services and entertainment sectors in the Jackson Purchase Region of western Kentucky and southern Illinois. Two major hospitals, several barge transportation companies and a myriad of other businesses important to the region call Paducah home.

The city has also grown into one of the largest art scenes in the country. Of the 180 cities designated as UNESCO Creative Cities, less than 10 are located in the United States. In 2013, Paducah became the ninth American city to receive the designation, an honor that even some of the largest cities in the country have not earned.

The UNESCO Creative Cities network aims to foster mutual international cooperation with and between member cities committed to investing in creativity as a driver for sustainable urban development, social inclusion and cultural vibrancy.

“The opportunities and amenities available in this small town are impressive,” said David Carroll, general manager of Paducah Power System. “I would say we have a charm similar to Charleston, S.C. in that visitors love our community for its hospitality and celebration of the arts, as well as the local food culture.”

Considering its size and the number of opportunities available locally, the City of Paducah certainly seems impressive. The same is true for Paducah Power System (PPS).

“PPS operates on a much larger scale than other utilities of our size,” said Carroll. “Our staff has designed and constructed our 161-kV and 69-kV transmission lines, and we own and operate a 120-MW simple cycle peaking plant, which is powered by 16 miles of high-pressure gas line that we also own.”

PPS employs 61 people, including 19 lineworkers, that oversee more than 430 miles of electric line with an average yearly load of 62 megawatts (MW) and an annual peak of 140 MW. The size of the utility is necessary by its design. Unlike most public power systems, PPS was formed under a state statute as a separate municipal utility entity, giving the utility a unique operating structure — independent of the City of Paducah, PPS operates with its own board of directors who have total control of all utility operations.

After its formation in 1961, PPS acquired all of the service territory of Kentucky Utilities in the area, including areas outside the city limits. In fact, 30 percent of PPS’s current retail customers reside outside of the city in the surrounding county. 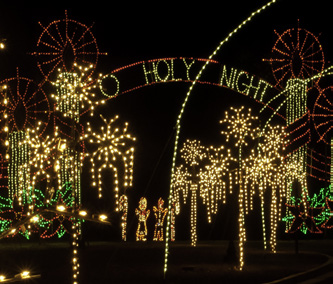 For the past 23 years, Paducah Power System has held the annual Christmas in the Park light display. The event draws visitors to the city, creates a beautiful holiday display for the community and raises money for the most vulnerable among us during the season of giving. As of 2019, these efforts have resulted in the collection of $739,839 and over 1,000,000 pounds of food that is all donated to local agencies to assist those in need. To learn more about the Christmas in the Park display, visit www.paducahpower.com/community.

Aside from its extensive customer base and unique structure, the utility is also an aggressive leader in other areas. PPS has taken on a number of large generation projects that many utilities of a similar size do not consider. One example of this is the Prairie State Generating Company (PSGC) in Southern Illinois, for which PPS holds a 7.82 percent ownership stake through the Kentucky Municipal Power Agency. PSGC is a 1,600-MW supercritical pulverized coal power plant providing energy to 180 public power communities across the region. AMP is the largest equity owner of the plant, at 23.26 percent.

“Few utilities of our size take such an active role in the power markets,” said Carroll. “We have responded to several full requirement power supply RFPs for smaller utilities and currently have a contract to serve a Kentucky joint action agency with 90 MWs of peaking capacity and energy.”

The utility also subscribes to 15 MW of hydropower generation spread between five hydropower plants along the Ohio River, through their participation in AMP’s Hydro Phase I and Meldahl/Greenup hydroelectric projects. These five projects are run-of-the-river hydroelectric generation facilities, owned or partially owned by AMP, that divert water from the existing U.S. Army Corps of Engineers on the Ohio River. Additionally, PPS owns 2 MW of hydropower generation through the Southeastern Power Administration. PPS believes that through these projects they are preparing their community for the generation needs of the future.

PPS has also been a leader in the deployment of new technologies and services. Currently, the utility is undertaking multiple projects including a Light Emitting Diode (LED) street light conversion project, as well as a cost-of-service rate study and evaluation for the potential addition of network automation to their 69-kV transmission system.

While the City of Paducah and its public power utility are in many ways much larger than they seem, they remain a small town at heart — the kind of place where an electric utility is more than just a business serving customers, it is an important part of a tightly-knit community. This bond can be seen in projects like PPS’s annual Christmas in the Park event and Public Power Week e-Scrap Collection event, or simply in the work they do every single day. This is why the American Public Power Association awarded PPS the 2019 Community Service Award, which recognizes utilities for “good neighbor” activities.

“We see our customer-owners in the grocery store, at ballgames or around the neighborhood, and it brings a strong sense of pride and accountability to the work that we do,” said Carroll. “We are not so large that there is not a direct relationship, and the people of this community are important to us. They are the reason we strive to accomplish more than a utility of our size might be expected to do.”

As is the case with many public power utilities, what drives Paducah Power System is the bond that it shares with its community owners.