Incorporated in 1869, Haskins is a small village in northwestern Ohio that still largely leans on the area’s agriculture as its driving economic force. The local grain elevator is the Village of Haskins’ largest commercial electric customer.

Nestled between Bowling Green and Toledo, Haskins was a historically important part of the area’s railroad system, a piece of heritage that residents of the village still embrace. The village’s most popular destination, the Mail Pouch Saloon, is named as a tribute to the history of the mail pouches that were picked up and dropped off from the side of a moving train, using nothing more than a hook and practice. These ties to the railroad were surely one of the driving forces behind the creation of Haskins Electric in 1918.

In its 100th year of service, Haskins Electric serves just over 550 meters, mostly residential, with a system peak of approximately 1,650 kilowatts (kW).

This bedroom community, boasting a current population of 1,188, is steadily growing, and Village Administrator Colby Carroll believes that trend will continue.

The local grain elevator is the Village of Haskins’ largest commercial electric customer.

“People want to live here because it’s a small town and it’s generally located in the center of everything,” stated Carroll. “You can be in Toledo in 10 minutes, Bowling Green is right down the road and Owens Community College is right on the other side of Interstate 75.”

Between the censuses of 2000 and 2010, the village saw its population nearly double, and the growth does not appear to have slowed since then. When visiting Haskins, it is impossible to miss the abundance of newly constructed homes in the area, as more and more people take note of the village’s desirable location and idyllic setting.

Though the village’s growth is largely due to their rising residential numbers, commercial investments have taken notice. Recently a new business, Titan Mechanical, decided to call Haskins home. According to Carroll, Haskins Electric was a big draw for them.

“When we told them about Haskins Electric being a public power system, he said ‘you have got to be kidding me, that is great,’” stated Carroll.

Titan Mechanical, a provider of facility and utility construction services, brings an estimated 20-30 jobs to Haskins, and Carroll says that is in large part thanks to the reliability of Haskins’ public power system.

Since arriving in 2009, Carroll and his utility crew have placed an increased emphasis on reliability, and many of the locals have noted the change. Some of the village’s older residents recall a less dependable system in years past and have shown an appreciation for the more consistent service. Carroll believes these improvements in reliability are largely due to the talented lineworkers that the village has brought onboard. 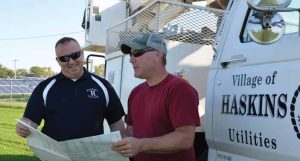 Since becoming village administrator, Carroll has surrounded himself with the right people for the right jobs, and it is paying off with well-deserved recognition. At the 2018 AMP/OMEA Annual Conference,

Kevin Norman, Haskins’ lead lineman, was named a recipient of a 2018 Hard Hat Safety Award, and Haskins Electric was presented with a Transmission and Distribution Safety Award for no time loss due to injury.

Carroll also noted that many of the changes in the village’s electric system were related to a change in mindset that his crew has helped to instill. He believes the growth of Haskins and a reliable electric system must go hand in hand, and that a growing village will present the village and his electric crew with new challenges in the coming years. They are already preparing to face them head-on.