According to the listing, published in USA Today in September, Grove City is one of the most affordable places to live in the country, with goods and services costing about 80 percent of average prices across the country. But that is only one of the borough’s many attractive features.

The borough of 8,322 people, established in 1883, is located near the crossroads of I-80 and I-79 in western Pennsylvania about an hour north of Pittsburgh. This ideal location is one of the busiest areas of the state, and it has helped to ensure that the borough’s residents have access to a vast job pool. 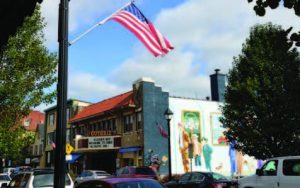 “We are very fortunate to be at this crossroads in western, Pa.,” stated Mayor Randy Riddle. “Being so close to so many large and important employers is a big reason why the borough is such a great place.”

Grove City has long been home to two of General Electric Transportation’s larger locomotive engine production plants, which were recently purchased by the Wabtec Corporation. Additionally, the borough is in close proximity to a number of other major employers, providing the local workforce with a diverse set of options.

In addition to being in an attractive location for businesses like Wabtec, the borough is also home to Grove City College, a private learning institution of liberal arts originally founded in 1876. The borough and college have long worked together, helping to make Grove City such a nice place in which to live and work.

The college is a huge part of this small Pennsylvania community’s success, bringing in more than 2,000 additional residents and drawing in countless additional visitors during the school year, while also serving as one of the largest employers within the borough limits. This positive partnership between the community and its largest employer has been wildly effective in promoting the borough’s growth and success.

The combination of industrial employers and Grove City College has put the borough in the ideal position of being a small community that is not reliant on one single business or industry. This has allowed the community to thrive at times when many others have struggled.

In their explanation of a number five ranking, 24/7 Wall Street reported that Grove City had a five-year unemployment rate of only 0.9 percent during a period when the national average rate was 4.1 percent.

“We are unique in that we are not reliant on one or two large companies,” said Borough Manager Vance Oakes. “Our mix of employers has allowed us to be more resilient to economic downturn over the years. They all work really well with the borough, and that relationship is a big factor in our success.”

However, while the borough’s outstanding location and source of employment has been a boon for the prosperity of its residents, the incredible work of Grove City’s community-owned electric utility cannot be overlooked.

“We are extremely fortunate that our forefathers had the foresight to establish our own public power utility,” said Mayor Riddle. “It has allowed us to provide high-quality and responsive services to our residents that many people can’t get from their electric utility.”

Oakes believes that ability of the Grove City Electric Department to provide great service while reinvesting in the community benefits its residents. While many communities are left to deal with a company that might be hundreds of miles away, Grove City residents have the benefit of getting their electric from loyal public servants.

“For example, three of our employees have been with our electric department 38 years or more,” said Oakes. “They are dedicated individuals with the best interests of our community and residents at heart, which has helped the community to thrive.”

At first glance it may be surprising to see a small borough like Grove City at the top of a list for the best places to live in the U.S., but the many great attributes running through this community makes it clear why Grove City is so special.