Building Value Through Economies of Scale

The economic concept of economies of scale allows AMP to provide efficient services and offerings to its members. At its simplest definition, “economies of scale” means there is a reduction in cost by increasing the amount of production.

“Economies of scale refers to the economic efficiency that results when a process is carried out on a larger scale,” said John Bentine, senior vice president/general counsel. “The more of something you do, the greater chance there is in efficiencies of doing so.” 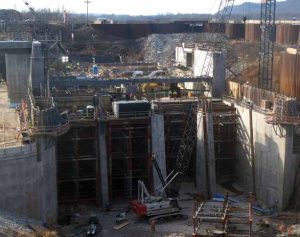 The Willow Island hydro project, is one of four – along with Cannelton, Meldahl and Smithland – that will be providing participating AMP members with more than 300 MW of clean, renewable power for 80 to 100 years.

For AMP members, there are many opportunities in the power industry where increasing the size of an operation yields cost advantages. This concept applies to joint ownership of electric facilities; pooled buying power in the energy markets; and pursuing better ways of generating, transmitting and distributing electric power and energy.

“Economy of scale is just good business – it’s cost effective,” said AMP Board of Trustees Chairman and Napoleon City Manager Jon Bisher. “Our members can take advantage of pooled resources for added value. The higher the quantity, the lower the prices.”

Several members joining together to purchase power in the energy markets will bring a more efficient outcome than a few members on their own because, as a bigger group, they can increase the amount of power purchased and receive a better rate. Also the transaction costs per megawatt-hours of an asset or power purchase tends to decrease the larger the size, yielding additional savings.

The same is true for dispatching costs. “If AMP is purchasing and dispatching power for 40 members already and 10 more join in – now that overhead is split among 50 instead of 40, which creates a savings,” said Bentine.

“The benefits of economies of scale are achieved by AMP and its members working together,” said Bentine. “We are able to facilitate partnerships within our membership on a variety of projects.”

In addition to wholesale power purchased on the energy market, AMP supplies power to member communities through generation from a diverse portfolio of generation assets utilizing hydro, wind, solar, landfill gas, natural gas and other fossil fuels. These projects came to fruition because groups of members joined forces to purchase “project shares” of those larger projects.

The concept applies to the scale of a generation unit, be it measured in megawatts or megawatt hours. AMP, as a group of members, is able to acquire larger-size, more efficient units than an individual community. This savings is passed on to other members as they can participate in a small project share of a much larger project.

“AMP bringing in out-of-state members has provided additional economies of scale in all areas,” said Bentine.

AMP is currently constructing four hydroelectric projects on the Ohio River. By increasing the scale of the project – building four facilities at the same time – there are significant savings. From purchasing turbine generators for the four projects all from VOITH, to lessons learned on construction from one project to the next.

Throughout the organization and across departments, AMP takes economies of scale into power supply, generation assets, member representation, member programs and more. Nearly all of AMP’s program offerings embody economies of scale.

“This helps our growth as an organization, facilitates relationships between members, increases productivity and helps our bottom line,” said AMP President/CEO Marc Gerken. “It’s a win-win scenario all around.” 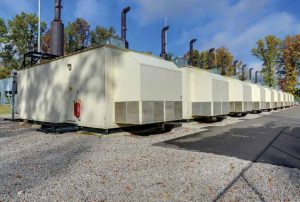 From engineering and technical services to Efficiency Smart and Mutual Aid, the concept works – increasing the purchasing volume or number of participants lowers the costs.

“We are able to spread costs over a larger amount of output, purchase higher quantities at lower costs, get lower interest rates, and decrease risks,” Gerken said. “And AMP is right there to expedite the processes, making things run smoother and faster.”

Economies of scale also translate to the Ohio Municipal Electric Association (OMEA), which was formed by 18 communities in 1962 in an effort to increase the voice of Ohio public power communities. As the numbers grew with OMEA, it became more difficult for representatives to ignore that larger collective voice.

“A representative can’t push away a group of people as easily as they can one or two,” said OMEA Board President and Dover Mayor Richard Homrighausen. “Our futures and the futures of our communities depend on the involvement of our local people to make OMEA stronger and the benefits of public power known throughout the country.”

The OMEA now provides legislative liaison services for AMP and 81 Ohio public power communities. The voice of 81 communities combined is much stronger than one alone.

“On the national scale, as a collective influence – the number of points of contact with individual legislators can allow for a better communication with legislators as a whole,” said Bentine. “AMP members have an improved ability to influence federal policy because we now have members with relationships with senators and representatives from a seven-state area about our concerns.”

The benefits of economies of scale also extend to the national level when dealing with the Federal Energy Regulatory Commission (FERC).

“All of AMP’s members are affected directly or indirectly by FERC,” said Bentine. “AMP intervenes in those cases, and by its intervention, represents the interest of groups of members or members as a whole. In doing so, we eliminate the need for individual members to intervene.”

This, in turn, becomes much less costly for members and allows them to focus on the issues that arise at home knowing that AMP is handling most issues on state and federal levels.

AMP’s growth and success are contingent on the cooperation and collaboration of communities. As more members get involved and engaged, the organization – through economies of scale – can provide additional benefits and savings.