What is Driving Your Power Supply Costs?

“When you look at the power supply costs and the price of energy, power markets are fairly low now, mostly because of the discovery of shale gas plays since the economic recovery began [following the Great Recession of late 2007 through mid-2009],” stated Mike Migliore, AMP vice president of power supply planning. “Back in the early 2000s, that wasn’t the case. We ran into issues with gas — prices were high, the market was far less stable and falling gas production could not meet rising demand. In part, driving us to build our own generation facilities to offset the widely-forecasted high energy prices for years to come.”

Since that time though, markets have recovered and, for many utilities, appear far friendlier. Natural gas prices have dropped and the market has stabilized, thanks in large part to advances in the technology needed to extract natural gas from the major U.S. shale plays, including the Marcellus and Utica areas in Ohio, Pennsylvania and New York.

“Prices have begun to settle and that is expected to continue for the foreseeable future,” stated Migliore. “Unfortunately, there is more to power supply costs than the energy itself.”

While the cost of energy is currently low, other considerations such as rising transmission costs are greatly inflating power supply costs.

“We have very cheap energy prices right now,” stated Patrick McCullar, President and CEO of Delaware Municipal Electric Corporation. The problem is that transmission and capacity issues keep pushing prices back up, and transmission companies know they can get away with raising rates.

AMP investigated the issue extensively and documented that the rise in transmission prices has been dramatic in many cases. According to the findings of Ken Rose, a nationally-recognized expert in the structure, regulation and economics of U.S. energy markets, transmission prices have risen dramatically since 2011, by as much as 475 percent in some places. Supplemental transmission projects are largely to blame for these steep rises in prices.

“There is a shift from baseline projects to supplemental projects as revenue requirements and transmission rates have gone up, a lot — way beyond the levels of inflations,” said Dr. Rose.

These ever-increasing transmission rates are having a negative effect on utilities, especially as there is no telling how much they may rise. 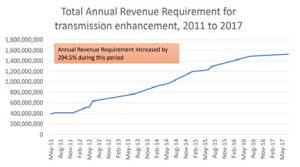 “Transmission is the big wild card for us because it’s growing at double digit increases each year,” stated Jeff Brediger, Orrville director of utilities. “We run lean as it is. Transmission costs can increase by a half a million dollars a year or more, and we have no way of knowing what the dollar amount will be. If we had half a million dollars of fluff in our budget to throw around, we would be run out of town by our customers.”

One issue enabling this problem is the lack of oversight of supplemental transmission projects.

There are two types of transmission projects, and it is important to understand the differences in oversight assigned to each. A baseline project is one that is necessary to maintain reliability of the grid. PJM Interconnection has a transparent process to address grid reliability concerns. Some baseline projects are subject to competition.

However, supplemental transmission projects — ones that are not required to satisfy reliability, operational performance or economic criteria — do not receive the same level of scrutiny. Like baseline project costs, the costs of supplemental transmission projects are also passed along to consumers, but without a determination that they are necessary or prudent before they go into service, and absent the competitive option.

“Our recommendations are to proceed as aggressively as we can in the current PJM stakeholder process in trying to get transmission owners to provide similar amounts of information, transparency and data for supplemental projects as is required for baseline projects and regional transmission projects,” stated Tatum.

Furthering efforts to assist members, in 2018, AMP Transmission, LLC (AMPT) was created to achieve economies of scale for the municipal members of AMP subject to the North American Electric Reliability Corporation (NERC) Transmission Owner requirements and also to provide transmission services that benefit AMP members, including the purchase and ownership of transmission facilities and technical and other services to assist members in their transmission planning. AMPT is a transmission-only, non-profit, Ohio limited liability company of which AMP is currently the only member. “AMP was originally formed because Ohio’s municipal utilities wanted to control our own destiny, and AMPT formed in much the same way,” said Joel Mazur, Napoleon city manager. “Along with many other benefits, AMPT provides the expertise and resources to be more engaged in the PJM transmission planning process.”

Lower energy prices are also being offset by the costs associated with the sequestration of Build America Bonds (BABs). BABs are direct pay bonds that were supposed to provide a 35 percent subsidy to the issuer, which is covered by the federal government. However, when Congress enacted budget sequestration, which is the automatic cut to spending, BABs were among the many programs that were subject to cuts. These cuts have amounted to the subsidy of these bonds being reduced by 5–6 percent per year, which results in an increased financial burden for the issuer.

“For the members who are participating in the Prairie State Generating Company, Combined Hydro Projects or Meldahl Hydro Project, the sequestration process has resulted in a significant lack of promised funds,” said Jolene Thompson, AMP executive vice president of member services and external affairs. “To date, sequestration has cost our project participants around $20 million with another $40 million expected over the life of the sequester, which ends in 2027 and may be further extended.”

“We have been working with other stakeholders to advocate with federal policy makers about the need to right this wrong,” explained Thompson. “Recently more than 114 public power entities signed a letter to key Congressional leaders on the topic.”

While energy market prices are generally stable, that does not change the fact that rising transmission prices and the increased costs associated with the sequestration of BABs are both having a negative effect on members’ bottom lines. Resolving these issues will be difficult, but AMP continues to focus on resolutions.

As always, advocacy is one of the first lines of defense for any major issue affecting the public power industry, and AMP continues to work with members in order to amplify our message. Policymakers may not realize the enormity of supplemental transmission costs or the overall effects of sequestration when hearing about it from one source alone, but when AMP, its members and other interested parties are providing the same insight, their interest and understanding will hopefully begin to shift in public power’s direction.

Additionally, AMP will continue its advocacy efforts with Congress, FERC, PJM and within the transmission planning process.

Members are encouraged to stay involved in these efforts, especially by staying active and involved with the lawmakers in your legislative district and answering AMP’s legislative calls to action.