On July 20, 1969, at 10:56 p.m., Neil Armstrong uttered one of the most famous sentences in human history and the City of Wapakoneta forever became the home of the first man on the moon. 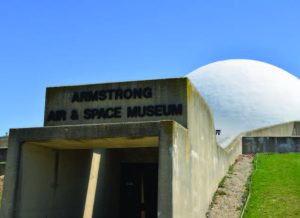 The Armstrong Air & Space Museum is located in Wapakoneta, the hometown of Neil Armstrong, the first man to walk on the Moon.

“We have been doing Armstrong-related things all year,” said Wapakoneta Mayor Tom Stinebaugh. “For this year’s festival, we kicked things off with a balloon rally on July 12 and 13, and the parade on July 14, which I believe was the most attended event of the celebration.”

According to Mayor Stinebaugh, preparations for the festival are always extensive and long thought out — the committee charged with planning the celebrations has been working for nearly a year. For the Wapakoneta Electric Department, it creates more projects on an already extensive list, but they continuously prove to be more than prepared to meet the challenge.

“The Electric Department does end up doing a good bit of extracurricular activity for the festival,” stated Electric Superintendent Levi Cecil. “There are banners to hang and electric work to prepare for the vendors, but the extra work is worth the enjoyment it brings.”

The extra work is nothing new to Cecil’s electric crew. While the city’s population has stayed relatively stable, slowly inching toward the 10,000 mark since 1990, the local economy has continued to grow and the Electric Department has kept busy.

Regarding the city’s growth, the new big buzzword is Pratt Industries, a Georgia-based company that operates recycling centers and 100 percent recycled paper mills around the country. 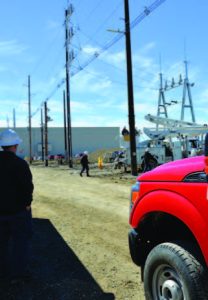 Pratt Industries, a Georgia-based company that operates recycling centers and 100 percent recycled paper mills around the country, recently selected Wapakoneta as the site for its newest location.

Pratt recently selected Wapakoneta as the site for its newest location and is expected to create as many as 325 new jobs, adding to the city’s growing list of commercial and industrial electric customers. However, the industrial growth had already began long before Pratt’s arrival.

“Before Pratt, a new greenhouse came in, so a lot of new building and expansion has been going on in the city,” Cecil said. We’re keeping up with a growing load and we’ve also been planning for the future.”

Though the city’s Electric Department is only a nine-member crew, it is clear they are doing an excellent job for the city, with proof coming in the form of their ability to successfully juggle multiple major projects.

The department was already working on the deployment of a new advanced metering infrastructure (AMI) system when they learned that Pratt was interested in moving their start date up by as much as two years. The department has largely been able to keep their AMI deployment on track while also installing a new electric substation for the Pratt facility, well ahead of schedule.

Cecil pointed out that being a public power utility and an AMP member has been helpful in maintaining the city’s success as well.

“One of the nice things about being a public power system is that we’ve got St. Marys, Jackson Center, Minster and New Bremen right down the road,” he said. “For the substation, we got some materials in that were too big for us to properly store, so I just gave St. Marys a call and they were more than happy to let us use their trailer. Instead of just one small department in Wapakoneta, you get the knowledge, experience and assistance of other AMP member utilities and all the people employed at AMP.”

The City of Wapakoneta was founded in 1782 and incorporated in 1849. The City has 5,436 electric meters, 79 miles of electric line and requires the purchase of approximately 199,531,156 kWh per year. They participate in the following AMP projects: AFEC, Meldahl/Greenup, Hydro Phase 1 and the Prairie State Energy Campus.

This year marks the 50th Anniversary of Neil Armstrong’s first steps on the moon and Wapakoneta certainly celebrated its own hometown hero. The 2019 Summer Moon Festival, July 12 – 21, featured food, games and live music, along with a hot air balloon rally, parade, pageant and events at the Armstrong Air and Space Museum.

The festival featured the local-favorite bed races, where the reigning champion, Wapakoneta Electric Department, unfortunately gave up their title this year to the Village Green Floral and Garden Center. The competition involves teams navigating a bed on wheels through a number of obstacles throughout the village.

Learn more about the festival or how to join the tens of thousands who attend each year at www.firstonthemoon.org or www.summermoonfestival.com.